NAVICON TORTURE TECHNOLOGIES – YOUR SUFFERING WILL BE LEGENDARY – 2CD

This is not a return from the grave for Navicon Torture Technologies, but rather a proper re-issue of the bonus CD’s that came as part of 2009’s Gospels of the Gash boxset. Consisting of 18 collaboration tracks and remixes, these two discs boast a track list featuring phenomenal artists both obscure and infamous, who have joined forces with NTT to construct an epic display of undulating drones and visceral screams. Once again, NTT blurs the lines between the brutish intensity of power electronics and introspective dark ambient contemplations. The list of collaborators includes: Deutsch Nepal, Eidulon, Herbst9, Jarboe, Kristoffer Nystroms Orkester, The [Law-Rah] Collective, Troum, Aun, Black Sun, and many others. Active since 1997, Lee Bartow has solidified himself as one of the foremost composers of angst ridden, power electronics and dark ambient/industrial sounds. Following the 2CD set “Gospels of the Gash”, Navicon was officially laid to rest, but Lee has since reincarnated himself in the highly regarded project, Theologian, where he continues to push the boundaries of extreme sonics. In luxurious fold out DVD Digipak, designed by Jorden Haley. Malignant/TumorCD60 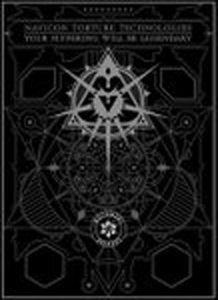 You're viewing: NAVICON TORTURE TECHNOLOGIES – YOUR SUFFERING WILL BE LEGENDARY – 2CD 14,00 €
Add to cart