Published in 2004, two years after The Crystalline Address, Kim Cascone’s collaboration with Scanner. In the 80’s, Masami Akita, Asmus Tietchens and Kim Cascone collaborated on a CD called ‘Grav’ that was eventually released on Silent Records in the early 90’s. Having gone their separate ways, Masami and Kim reestablished contact in the late ’90’s. After email address were exchanged, Kim received a copy of the ‘Amlux’ CD from Masami, and later heard about a remix project on Important Records paying tribute to the Japanese industrial/noise-maker. Cascone started his own remix based on extracts from the ‘Amlux’ CD. The new track was based on new editing techniques Cascone developed which were experiments in time compression by combining tape editing techniques commonly used in Musique Concrete with simple algorithms developed in Max/MSP. The track ‘Blowback’ – the prototype track using this editing style – was completely constructed by hand using a software sound editor. ‘7phase’ puts these editing techniques under algorithmic control in Max/MSP. By using each other’s published work as raw material for their collaboration, they then sent each other tracks via CDR to be used as either new source material or finished work. After choosing the best of the collection of tracks they had developed, Kim and Masami titled the pieces, sequenced the tracks and then designed a cover artwork for it using Jitter (a graphic library for Max/MSP). SR213 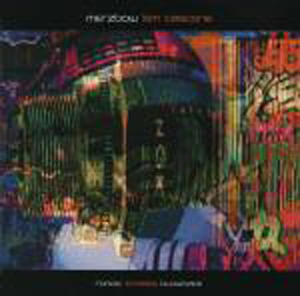