It’s hard to tell much about a band, except that it’s actually listenable, when all the information in the disc is written in Cyrillic, an alphabet (and respective language) which I couldn’t actually master in time for this review. Also, since their website and MySpace page do not provide any English information, I believe I may be setting an unsettling precedent – so the pressure is on me – for writing probably one of the first reviews on Majdanek Waltz in English.
Don’t be fooled, this is a good album, but for the very first time it’s like lurking into a completely unknown territory, which should set a good challenge for anyone who would like to dwell upon Majdanek Waltz’s music. Majdanek Waltz’s album, “Hamlet’s Childhood,” is quite soothing, driven by a violin and acoustic guitar and an occasional bayan (a Russian accordion), as well as male and female vocals. Maybe because of the language, but mostly because of the musical arrangements, this album carries a great deal of sadness. It really is a shame I can’t understand the lyrics. This album could, in a way, be characterized as quite monochromatic, as all the songs are based around the same instruments. Yet every song has its own very peculiar soul, and the occasional appearance of a solemn piano adds some variety as well.
“Hamlet’s Childhood” is a well organized and well recorded album, full of emotional music, beautiful instrumentation and composition, and it will definitely enthrall you and keep you listening. The artwork is also very peculiar, and the pictures of desolate buildings on the snow will definitely contribute to the record’s sad feeling. Don’t let the cultural barrier stop you, this really is a good album and will (almost) make you want to learn Russian. Song after song, “Hamlet’s Childhood” evokes grief and still stands out as an amazing folk album. Recommended. 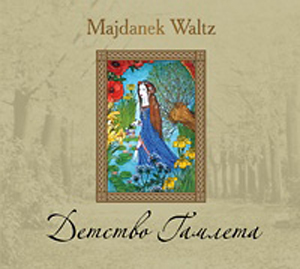