Very rare M.B. album released in 1980 as self produced music-cassette.
There was just few copies of the tape made by Maurizio, the album was also bootleged by a couple of labels into very small and poor tapes editions but this is the very first completely re-mastered official re-release into digital format.
A rare MB experiment of analogue repetitive sounds recorded with a Korg MS20 synth.
Factory pressed CD and Digipack, limited to only 100 hand-numbered copies.
Prologue:
Multiatom particles between electronic mutilation and noisy disgregation,
with the plain assistance of a neutronic synthesizer,
during the freezing month of December 1980.
The gradual development of the sounds aggregates ferromagnetic cluster
to develop liquid effects and solid modulations,
everything condensed in protonic macrostates.
– Maurizio Bianchi 2015 – 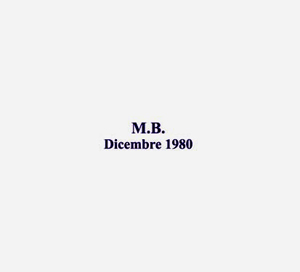