The second chapter of L’Amara see the humiliated and offended by life as protagonists. Sometimes overwhelmed by a greater fate, they succumb devoured by that hellish mechanism that is the modern society, full of violence and psychosis. Blood stories, betrayals, murders that tell us the post mortem stories of some of the protagonists. Chronicles from the Underground is by its nature a kind of journey backwards in the memory of those who are no longer here. Each author brought his story, his nightmare.
The Samples taken from “The Mask of the Red Death” open the disc and announce that the day of Liberation / Death is near, so begins the journey through the history of “La Rosetta” masterfully interpreted by Trevor (Northgate), a popular story from the Milan underworld. Giovanni Leo Leonardi’s Ballad of the Cravattaro (Siegfried / Carnera) takes us back into rooms full of smoke and alcohol, between people playing cards and pistols for a noir ballad. The slow and majestic “Rione Vendetta” played by Adriano Vincenti (Midnight’s Mobile Butchery) tells stories of love and knives in a Rome full of devotion and betrayal. “The Hanged Man” represents the most intimate moment of the album, overwhelmed by feelings and memories, a nostalgia that mounts and devours, waiting for a return. The voice of Giovanni Leo Leonardi is accompanied in this case by the splendid arrangements of Christian Ryder (TourdeForce, Porta Vittoria). A murder committed for love is the protagonist of “Recluso”, originally written in the thirties by Bregonzi, is proposed here by Gabriele Fagnani (Corazzata Valdemone, Solco Chiuso). “Il Malcontento” is a story of love and death, a bitter story, a confession that runs on the edge of a thin blade, a fatal embrace told by Jonny Bergamn (Nomotion, Inner Glory). Rural atmospheres, hunger and misery are the backdrop for “Sangue D’Osterie”, originally written by Gianni Caldararo (The Moonstone), partially revised and interpreted by Vinz Aquarian (Calle della Morte). “Julia” always sees the voice of Giovanni Leo Leonardi as protagonist, accompanied by Christian Ryder in the arrangements. “A Ritroso” rewinds the thread of remembrance through the painful experience of the war, a funeral lament that recalls the most intense songs of Luigi Tenco, all interpreted by Vido (Spiritocrampo). The journey of L’Amara ends with “Liberati”, a Crowlian ballad by Daniele Ianna (Sun’s Spectrum). The imperious voice of “The Red Death” reminds us that the masquerade is over and that now everyone can reveal it’s true face. So our protagonists, our stories, vanish in the fog of memory, behind a red velvet curtain. 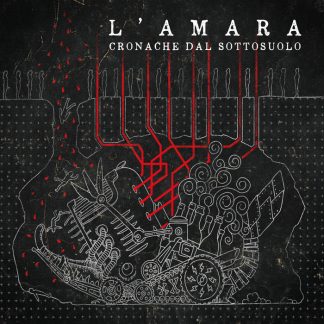