L.ed. 250 black vinyl, traditional tunes and songs by Michael Moynihan, Don Schabner and Annabel Lee. Released by Storm and TESCO ORGANISATION GERMANY.
Intertwining knotwork patterns run throughout ancient Celtic, Norse, and Anglo-Saxon art and ornament, but they are also reflected in traditional poetry and music. In order to explore this musical aspect, Annabel Lee (fiddle) and Michael Moynihan (bodhrán drum, voice) established the acoustic project Knotwork in the mid-1990s. They were soon joined by Dono Schabner, a master of multifaceted and driving guitar work. Together these three musicians play songs and tunes of life, death, and struggle from Europe and the colonies. Rustic yet refined, Knotwork creates a symmetry between then and now, Old World and New. The three-song EP “3 x 3” is the group’s first release. The A-side, “Heenan and Sayers,” is a broadsheet ballad recounting a true tale in epic style: the bloody, bare-knuckle boxing match between John Heenan and Tom Sayers that took place in Farnborough, England in 1860. Lasting 42 rounds, the fight carried on for two-and-a-half hours before it was finally shut down by the police. The B-side offers the energetic Norwegian fiddle tune “Kvernknurren (The Mill Sprite)” and a live version of the grim ballad “Twa Corbies” performed at a Midwinter 2013 concert in Brooklyn, NY. Studio material mixed by Robert Ferbrache. An enchanted equation, “3 x 3” is more than the sum of its parts. 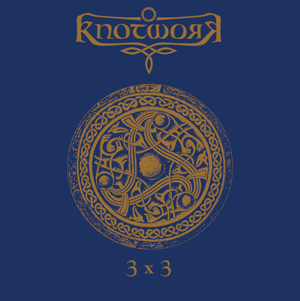