KLEISTWAHR – ACCEPTANCE IS NOT RESPECT – CD

Ramleh’s Gary Mundy has been rather prolific in recent years with his solo Kleistwahr project.
As with his main concern, there’s a deep-seated interest in pushing the parameters where certain sonics can fall into a seismic vortex of sheer overload yet remain tethered to a knowing sensibility where greater power can be derived from simply holding back.
Since the incredible This World Is Not My Home album in 2014, Kleistwahr has embarked on a single-handed mission to not only take such possibilities as far as possible, but also reach inwards and rip out its core being in order to further attempt to make sense of its doubtlessly tarnished place in the universe.
Although in and of itself often tempered to the point restraint assumes new, often disturbed (and disturbing) psychedelic or even filmic, properties, this music arrives like a spitting and foaming scream into the insanity of the void and the myriad challenges and questions it inexorably keeps hurling at us.
Whereas Ramleh captures the sound of at least two people dealing as best they know how with the constantly rising rivers of shit around us, Kleistwahr is akin to one man having scaled a great height poking out of an infinite chasm and wondering why he bothered.
This is uneasy listening sometimes rendered more palatable by dint of prowess rarely found in such realms.

On Acceptance Is Not Respect, an album itself broken into two parts and more heavily focussed on Gary’s searing musicality than the previous few albums, there’s an overwhelming sense of new forms taking hold that hint at an elegiac approach not previously witnessed.
Of this, Gary himself says, “I was trying to make the music more spiritual sounding this time as the album is about belief.
The first half is about personal and political belief and the second half about religious belief.
I was wondering about whether in the 21st Century, you can seriously get anyone to completely change their beliefs and [am] asking is there anything you believe that you would be willing to die for, and the difference between the way that most beliefs have been accepted/tolerated and [are] supposedly respected in recent times in [the UK].
Now our society is starting to break down, it becomes clear that that acceptance tends not to actually be the same thing as respect at all.”

This album once again arrives in a gatefold album-style sleeve in keeping with all of Gary’s Broken Flag releases and is limited to 300. 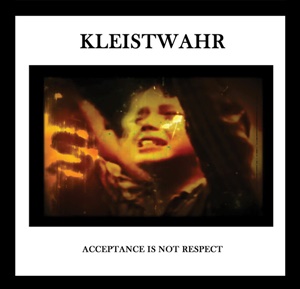 You're viewing: KLEISTWAHR – ACCEPTANCE IS NOT RESPECT – CD 9,00 €
Add to cart