Themes and sonics of ‘Buried Steel’ range from granite and impassive to dreamlike and somnambulistic, in keeping with the promise – and threat – of the title, dwelling on slow, infallible ruination: a gravitational downthrust upon misshapen monuments and structures which are mangled, overgrown and increasingly forgotten. A monochrome landscape where nature reclaims and redefines us as time passes.

Recording of the album was marred with events such as an electrical fire which damaged some equipment. As a result, a number of tracks on the album had to be pieced together from damaged analogue elements such as reel to reel (Khost reel to reel RIP). From this point, the dynamic of some of the songs was altered, shifting their eventual outcome, particularly the tone of ambient work on Buried Steel. 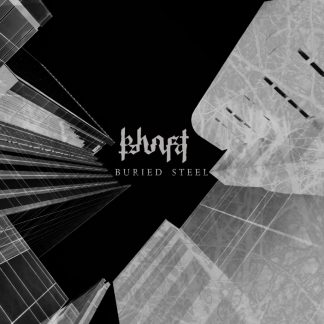