Hunting Lodge was founded in May of 1982 by Lon C. Diehl, Carla J. Nordstrom & Richard Skott
Rusch. To commemorate the 40th anniversary of the band’s inception and of their initial
releases, this set contains the entirety of the recorded output from the original lineup.
Harrington Ballroom is a restoration of the first Hunting Lodge release, a live recording from
their first public appearance September 4th, 1982 which was released later that month on a 60
minute cassette.
Exhumed represented the first “studio” recordings of Hunting Lodge to be released
commercially. This contained the entirety of the promo-only 23 Minutes Of Murder (October
1982) along with enough supplemental material to fill out a full-length cassette album.
Exhumed was originally released by Datenverarbeitung, (West) Germany in March of 1983.
Reanimated is a “rarities” album which contains nearly half an hour of previously unreleased
material. The first three tracks are full length recordings from a basement improvisation which
the three band members recorded in January of 1983, in order to flesh out enough material for
Exhumed. In addition, Reanimated contains new mixes, alternate versions and tracks never
before released.
These recordings are newly transferred from the original tapes by Knox Mitchell, restored &
remastered by Grant Richardson, and have never sounded better. 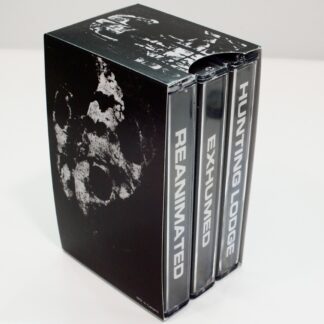