The mysterious and legendary project Gerechtigkeits Liga has returned with this long-awaited rerelease. It contains 70 minutes of rare material, which was recorded throughout the mid-1980s, including the rare 12″ “The games must go on” (originally released in 1984 on G.L’s own label, Zyklus Records, in a small edition of only 500 copies). Also now available for the first time as part of the collection is the LP “Hypnotischer Existenzialismus,” which was originally released on SPK’s label “Side Effects” in 1985. There are also 7 additional bonus live tracks, 6 of which have never seen the dark of night. All tracks were recorded live in New York City. The artwork of the digipak comprises some known cover reproductions and unknown artwork, which has been carefully integrated into the original coverdesigns. Gerechtigkeits Liga is presently working on new material, which will be released in the near future. This Gerechtigkeits Liga digibox rerelease is the first release of the new German label Isegrimm Records, from which you will be hearing more soon. This prestigous release comes painstakingly packaged in a elaborately designed silver printed six-sided digipak. 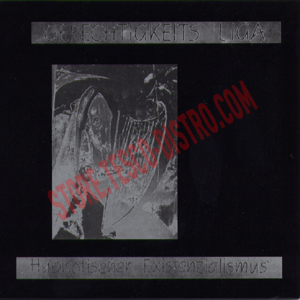