REPRESS IN STLIGHTLY DIFFERENT DIGIPACK. 20 years have passed since :Leichenlinie: got released the 1st time, and 10 years since it got released the 2nd time as CD accompanied with the :Truth will make you free: album. And now it shines here as the totally remastered 20 years anniversary edition. Completed with 2 additional tracks recorded around the same time and formerly released on the Monochrome Meditator MC only (SSSM/Japan 1991). This material stands for one of the most wanted records in this genre for all times. :Leichenlinie: remains as an outstanding release in the german post industrial music genre. The well-balanced music contains power electronic rhythm based tracks as well as dark drowning ambient pieces with haunting samples. Tracks like Klaus Barbie, Mind Control and Come Orgasm are played on various stations, parties and radios for the last 20 years. The two additional tracks, so far unknown to the majority, are fitting perfectly to the line-up of the early industrial-rhythm driven sound of the band. The LP version, which is a mailorder item only, comes as close as possible to the original version, with a printed and stamped metal plate attached to the front cover, DIN A4 insert and an unique extra afixed to the backside of the cover. Limited and numbered to the original edition 291 copies only! The CD version comes in a nice spot varnished digipack with the logo debossed on the front cover, similar to : In-Konflikt :. Genocide Organ got founded in 1985. :Leichenlinie: compiled G.O. material that got recorded between 1987-1989 at Strebelwerk/Mannheim. Originally released in 1989 as Tesco 001. :Leichenlinie: is still an outstanding milestone in europeon “post industrial” music as it let loose new creative energy of a genre which was thought to be dead. The socio-political criticism, and cultural-terrorist approach is inherent. A document of its time! The opening opus of the bands restless striving for more depth in a shallow reality, in a society that likes to hide the unpleasant and controversial sides of life. The phrase “noli me tangere” is no longer in effect! Tracks: 1. Ave Satani 2. Mind Control 3. Klaus Barbie 4. Face of Horror 5. Come Orgasm 6. Stalins Orgeln 7. 1…2… Tot 8. Negros in Sky-Wars 9. Keiner kommt zurück 10. Amazade y Negri 11. This is no lie : Der Tod ist ein geradliniger Prozess : ( Death is a straightforward process) EAN: 4038846000805 TESCO ORGANISATION (TESCO 080) MySpace:www.myspace.com/genocideorgan 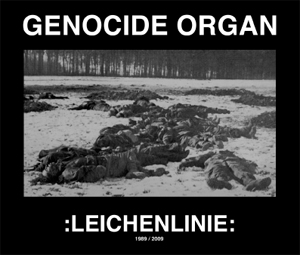