The year is 1996 I was surfing on cold waves through the very heart of Linkopia, night after night it was all the same. Sleeping in the Karmanik basement seduced by delerium echoing between white concretwalls. I could hear the equiptment slowly disintegrating as I put out the light, broken sounds of a dying culture. This might be the erosion of history eternally scraping on the crown of mankind…or was it just the decline of my personal belongings after years of abuse… and was there any diffrence between the two theories? I streched out my limb and pressed the record-button. – Lina Baby Doll. Originally released by Entartete Musikk in 1996 as a limited edition LP. Now available in CD format with totally remastered sound, new artwork and bonus tracks from the Religion of Hate 7″ in original extended versions. A must for all the fans of Lina’s works who somehow missed the vinyl version! Format: A5 folding cover Total time: 54:00 (Wrotycz) WRT005 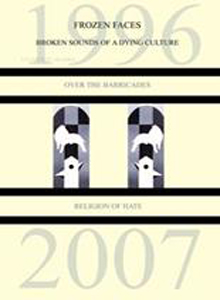