If there is one band in the current Neofolk scene, that stands out among all other bands it’s ET NIHIL for sure. Rising from the ashes from legendary LUFTWAFFE, b9 InViD, RB and Jonathan S consequently follow their artistic vision and present a highly dynamic and powerful variety of the genre. “Nor Am I” is their first official studio release after the limited and sought-after “Onus” CDR, two live-albums and numerous singles and the first one to be released on LICHTERKLANG. “Nor Am I” contains 13 tracks of pure Neofolk mayhem, spanning from the morbidty of the Neofolk genre to intense drumming Martial Industrial is known for up to harsh and distorted vocals characterized by the Industrial scene, defining a new and modernized version of Neofolk.
The album comes in two versions: a regular digipak version and in a limited edition including a remastered version of “Onus” on CD. The remaster was done by Michael Power from AREA BOMBARDMENT. 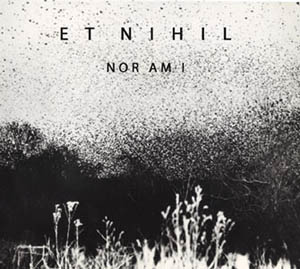