Entre Vifs offers us with “Ontology” a
selection of extracts from their best recent
sessions.
Each of these excerpts has been cautiously
positioned by the authors, so that they
appear like bruitist pieces, composed with
care, even though all of these pieces are
played live. Each time, it is a symphony
of noises extremely varied in intensity and
frequency where one can distinguish, with
precision, the sound detached from its original
source. Entre Vifs’ noise generators are
delicate and relatively small in size, but the
sounds they produce through mechanical
means are captured by electric guitar pickups
and piezoelectric cells, then sent to a
battery of amplifiers and homemade effect
processors. The sound passages suddenly
arise from very orderly silences. The sound
is extremely massive, however it is not only a
question of volume but a stereophonic depth
effect where sonic masses seem to thicken
and change continuously. Furthermore, we
sometimes hear a residual soundwave that
could be due to the complexity of the material
and the large number of “noisers”, in
particular at the beginning of some pieces,
as if the duo began its sessions in unison,
that is, exactly at the same time. Entre Vifs
takes us directly from the microcosm of the
Entre Vifs – ONTOLOGIE
air movement to the macrocosm of their
organic bruitism, which is not unrelated to
the title of this album. Faced with the materiality
of the sound of these extracts where
each piece is rendered with great sonic
precision and where the sound of the “noisers”
is dotted with plays in unison as if
the machines began to shout at the same
time, we cannot help but think of Arseny
Avraamov’s “Symphony of Factory Sirens”,
which in 1922 practiced the art of noises in
its mechanical version using among other
things the foghorns of the whole Caspian
Fleet. The fact is that we cannot define the
sensations of power produced by these
extracts in terms pleasing to music-loving
people. They are soundscapes entangled as
if we had traveled quickly from the fury of
the volcano to the most industrious human
concentration through an avalanche at high
altitude. The power of chaos is nothing more
natural than what nature can produce when
it speaks to us. However, it is important to
understand that the administration of chaos
by Entre Vifs doesn’t care to fuss over decorative
effects, and that rather than tickling
politely or subversively our eardrums, EV
opens the doors of raw material with the joy
of children who blow their balloon near our
sleeping ears. With this album, we can physic
ally touch the creative process of Entre Vifs,
from the sometimes absurd idea of building
an instrument from objects not intended to
produce sounds, on to the labor of practicing
this instrument long enough to improve
it, finally to the joy of freeing the action with
these tools at first glance recalcitrant.
From the smallest of emergence, that is to
say the random and stubborn idea that we
discover by pure sequence of circumstances,
Entre Vifs makes us hear the most massive
by pushing the doors of the materiality of
chaos-noise, screened through the creative
human industry in its most persistent form. 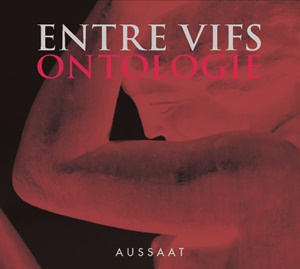