C60 professional tape – silk-screened transparent red shells – 5-panel J-card – in jewel case – lim. ed. of 97 hand-numbered copies)Composed back in 2007, “SUBSIRKUS SINUS LILLE VEGA” was originally conceived as a direct follow-up to 1997EV’s first long player “Dead.Ends.Sinful” (Punch Records, 2006). But somehow the release never took place, and the album remained hidden to the world – to this day. Each of 1997EV’s work has a personality and a colour of its own, and if “Subsirkus?” is as psychedelic as any of the Sardinian project’s records ever were, it also has a far more lysergic-acid-folk feel, with loads of acoustic guitars, wah-wah effects, delay worship, some Nicoesque harmonium and of course the typical spaced-out lyrics. What better way to wait for the band’s brand new album (out later this year on RuR) than to take an acid trip down memory lane? 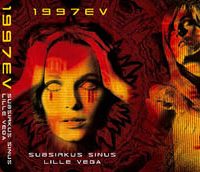